New data suggests the UK economy is facing a worrying “pincer movement” due to the coronavirus pandemic, with a surge in limited companies going bust being mirrored by a drop in new firms setting up.

The analysis by the Enterprise Research Centre shows that 61,472 limited companies folded between the start of March and mid-April, with a parallel drop in the numbers of new firms registering with Companies House.

Comparing figures from March this year with the full month’s data from last March, the number of firms going out of business was 70% higher than a year ago (up 21,206), while the number of new firms incorporated fell by 23% (14,270 fewer).

It suggests the UK economy is losing existing firms at a faster pace than in recent years as well as seeing a big drop-off in new starts deterred by the uncertain outlook.

There were notable variations observed among sectors. While all sectors saw a rise in the number of dissolutions, transport was hardest hit with nearly three times more firms ceasing to trade (194%). Real estate, wholesalers and information services also saw marked increases compared to March 2019.

Newer companies have borne the brunt of the collapse in economic activity, with 46% of dissolving firms being less than three years old.

They said that while coronavirus is likely to be a major factor in both the rise in company dissolutions and fall in new incorporations, it was important to note that winding down a limited company could take months, owing to the need for 75% of shareholders by value to agree. The latest data therefore needed to be seen in the context of an economy that had already seen dampened growth from Brexit uncertainty.

The ERC is the UK’s leading independent research institute on growth, productivity and innovation in small and medium-sized enterprises (SMEs).

“These stark figures clearly show a significant rise in the number of company dissolutions and a parallel fall in new firm incorporations in a time period that coincides with the arrival of COVID-19 in the UK.

“They suggest our economy is facing a pincer movement of sharply higher business closures and a concurrent lack of new businesses starting due to an understandable fear about what the future holds.

“The Chancellor has unveiled a substantive package of support for UK firms, but we know that many are struggling to access this assistance. If those shortcomings aren’t remedied fast, we’d expect to continue seeing a long, slow decline among the private-sector firms that support millions of jobs across the economy.

“In that context, rather than seeing a V-shaped rebound as some economists have predicted, we could instead see an L-shape dragged down by a net loss of companies over a long period.” 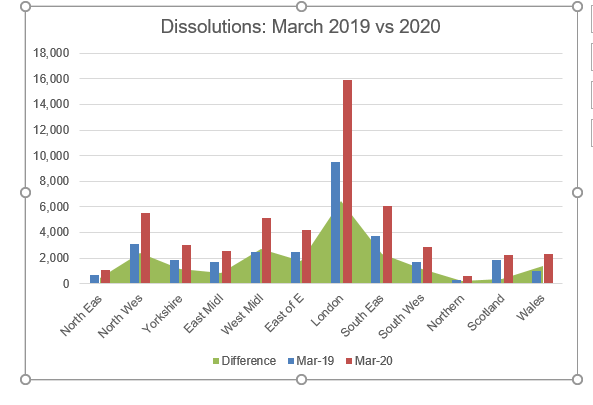 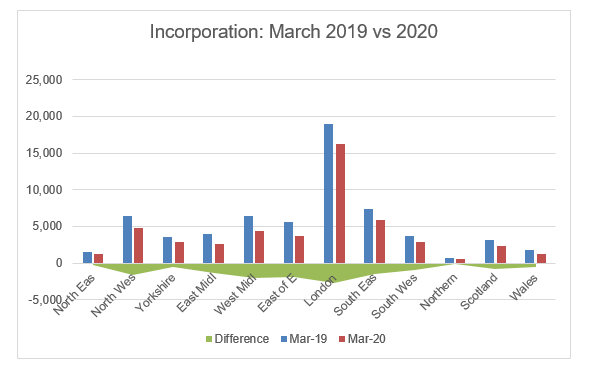 Dissolutions and incorporations all-UK – before and after March 23 (‘lockdown’) 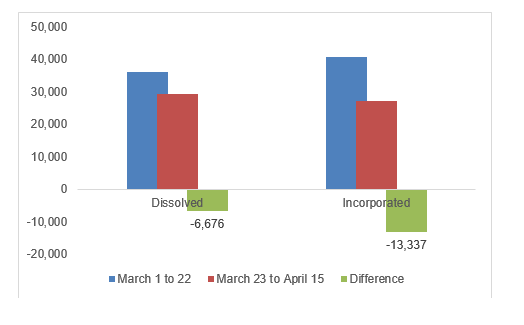 The ERC is the UK’s leading independent research institute on growth, productivity and innovation in small and medium-sized enterprises (SMEs). It is funded by the Economic and Social Research Council (ESRC), Department for Business, Energy and Industrial Strategy (BEIS), Innovate UK, The Intellectual Property Office (IPO) and the British Business Bank (BBB). The ERC is producing the new knowledge around SMEs that will allow us to create a business-friendly environment nationwide, grounded in hard evidence. We want to understand what makes entrepreneurs and firms thrive so we can spread the lessons from best practice and make the UK a more successful economy. The Centre is led by Professors Stephen Roper of Warwick Business School and Mark Hart of Aston University, Birmingham. Our senior researchers are world-class academics from both Aston and Warwick Universities as well as from our partner institutions which include Queens University Belfast and the University of Strathclyde.

For further information or to arrange interviews, please contact James Tout at ZPB Associates on 07989 610 276 or email [email protected]

END_OF_DOCUMENT_TOKEN_TO_BE_REPLACED

Left in the cold: How company directors are excluded from the Government’s...

Is small lending too big to fail? Covid-19 and P2P lending to SMEs
Scroll to top