Brexit’s threat to burgeoning small firms in Northern Ireland and less dynamic areas of England, Wales and Scotland is underscored in the latest annual health-check of the UK’s SMEs.
The UK Local Growth Dashboard 2018, published by the Enterprise Research Centre, paints a stark picture of the nation’s varied growth geography among small and medium-sized enterprises.
Northern Ireland takes the top spot on many of the firm-level growth measures, while rural and coastal parts of England, Wales and Scotland display more sluggish activity.

On productivity, job-creating firms in parts of the North of England and Midlands are outpacing the South in growing turnover faster than their headcount. Only 8.4% of job-creating firms in the UK have positive productivity growth. The findings provide a grassroots dimension to previously-published UK government predictions on the impact of Brexit on regional economies. A no-deal exit from the EU, ERC academics suggest, could have a further detrimental effect on areas where the private sector is already showing a lack of dynamism.

Key findings from the report show that:
• Northern Ireland has some of the UK’s fastest-growing and most productive firms. Outer Belfast and Eastern NI have the highest proportion of companies reaching their ‘first million’ within three years of start-up (3.3%). This is striking given NI’s comparatively high reliance on the public sector.

• Northern Ireland also came top of the productivity rankings, with 11% of jobcreating firms growing turnover faster than employment over the 2014-17 period (UK average 8.4%). The ‘Northern Powerhouse’ region also performed strongly on this measure, led by Greater Manchester and Greater Leeds.

• Larger OECD-defined high-growth firms (average growth in employment of 20% or more over a three-year period and having at least 10 employees) are concentrated in a southern triangle bounded by Cambridge, Bristol and Brighton.

• Start-up rates are highest in London and the wider South of England, with hotspots in the Midlands and North. Wales, Scotland and Northern Ireland show much lower start-up rates than England.

• Coastal and rural parts of England in general show lower rates of business growth on most metrics compared to urban areas.

The UK’s 5.7m SMEs constitute over 99% of businesses, employing more than 16m people and have a combined annual turnover of £1.9trn, 51% of all private sector output.

The ERC is the UK’s leading source of independent research on the growth of SMEs.

Professor Mark Hart, Deputy Director of the ERC, said: “Our findings show a complex geography which challenges some of the preconceptions about the ‘hotspots’ of business growth across the UK. “There is evidence of strong business growth underpinning the development of the Northern Powerhouse but there are some faulty valves in the Midlands Engine which need urgent attention – especially in the West Midlands. “There’s also clear evidence that firms in Northern Ireland have achieved impressive growth and productivity gains over recent years. This may be down to the stability of the business support environment fostered by its business development agency, Invest NI. “But a real concern is whether this can be maintained if Brexit results in more complex customs arrangements – which on the current path is almost certain – either between Northern Ireland and the Republic, or indeed between Northern Ireland and the rest of the UK and beyond. With the private sector in Northern Ireland traditionally rather fragile, this recently developing good news story could turn very sour indeed. “Equally, many of the English regions as well as Wales and Scotland show weaker activity across the entire growth pipeline. The worry is that a macroeconomic shock, as predicted by the Government’s own analysis, could further damage business dynamism in these places.” 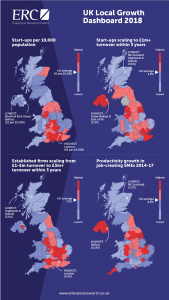 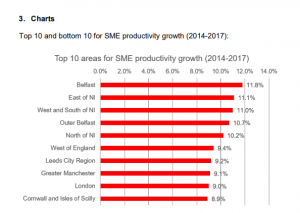 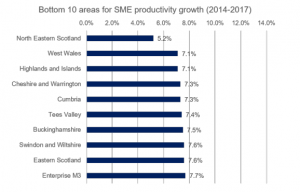 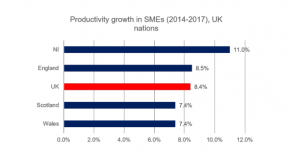 About the Enterprise Research Centre
ERC is the UK’s leading independent research institute on the drivers behind the growth and productivity of small and medium-sized enterprises (SMEs). It is funded by the Department for Business, Energy and Industrial Strategy (BEIS), the Economic and Social Research Council (ESRC), Innovate UK, The Intellectual Property Office (IPO) and the British Business Bank (BBB).
ERC is producing the new knowledge around SMEs that will allow us to create a business-friendly environment nationwide, grounded in hard evidence. We want to understand what makes entrepreneurs and firms thrive so we can spread the lessons from best practice and make the UK a more successful economy. The Centre is led by Professors Stephen Roper of Warwick Business School and Mark Hart of Aston University, Birmingham. Our senior researchers are world-class academics from both Aston and Warwick Universities as well as from our partner institutions which include Imperial College, Queens University Belfast and the University of Strathclyde.

Small Business Owner or Entrepreneur and why it matters?

Diversity and Innovation – the new evidence