Official statistics for 2018 – the most recent data available– suggest that business starts in the UK totalled around 380,000; or, just over 1,000 a day. In reality, this is an estimated figure based on VAT and PAYE records. UK Finance’s data – using bank account numbers – suggests an even higher figure. Nevertheless, it has long been recognised that those with an ethnic minority background have for decades been very heavily represented in the start-up community. Even at the lower figure of 1,000 starts a day, about 200 starts a day could be set-up by those with an ethnic minority background (or over 70,000 a year).

Unpicking the economic, social and cultural drivers of this phenomenon is more difficult especially with limited quality data split by ethnic origin. Over the last 20 years though, the Global Entrepreneurship Monitor (GEM) has built a research framework to monitor the entrepreneurial journey both for the UK and a wide range of other countries. This has filled gaps in our knowledge of start-up dynamics looking at gender, age, educational background and so on.  In a recent project at Centre for Research in Ethnic Minority Entrepreneurship (CREME) working with Enterprise Research Centre (ERC) colleagues at Aston and supported by the Federation of Small Businesses (FSB) we have analysed the full UK GEM data set to extend this analysis into a more detailed breakdown of ethnic origin.  In particular, as well as looking at long term trends in some cases we have grouped together over 20 years data to look at key ethnic sub-groups at a national and sub national level.

Overall, the results are very supportive of the data mentioned earlier on start-up numbers. The GEM measure of Total Entrepreneurial Activity (TEA rate) considers the percentage of working age people in the process of setting up a venture or already running a start-up/young business. The TEA rate can be examined with reference to the ethnic background of the respondents. The data shows that typically, the TEA rate for the non-white group covering all ethnic respondents was much higher than the one for the White group. For example, in 2012, the non-white TEA rate was 17.4 per cent of the population of working age compared to 8.6 per cent for the White group. Also, the ratio between the non-white to White TEA rate during this year was over two, higher than the average outperformance of the non-white community since 2002 (which was 1.6 times, or 60 per cent higher than in the White community). These results generally speaking held firm across all the key ethnic sub groups and UK regions. Not surprisingly then, start-ups led by those with an ethnic background are represented strongly in UK business formation activity. Recent data for the British Business Bank, for example, indicate that about 20% of all Start up Loan activity was with owners with a BAME background.

Clearly, the enhanced role of ethnic minorities in UK start-up activity has Implications for advice and support services, especially in terms of outreach and targeting.  Indeed, our new research also looked at the engagement of ethnic minority business owners in advice services and found they were much less common to be involved in formal training and advice networks and much more likely to relay on family and friends and informal advice.  These findings echo earlier ERC research in this area and, together, they present a real challenge to those involved in supporting advice services for diverse business communities, especially those in the start-up phase of activity where the closure rate is so high.

As we hopefully move towards a post COVID-19 phase of economic recovery it would be very helpful to have world beating support and advice networks in place especially for what has traditionally been a very entrepreneurial community in the UK. The start-up environment in 2020/2021 will look very different from 2018/2019. However, in addition to implementing changes to upgrade support services we also need to recognise – as well as economic turmoil -the wider picture on ethnic entrepreneurial activity has some very worrying recent developments as well. The GEM data reporting high average TEA rates for ethnic minority entrepreneurs goes back to 2002.  Looking at the most recent annual data is less encouraging. In particular, in 2018, there was a significant decrease in the TEA rate for the combined non-white group which fell to a record low level. Also, for the first time since the GEM study began, the TEA rate for the White group was higher than the non-white group (with the ratio of non-white to White falling to 0.9). To allow for statistical error, it is best to conclude that the ratio between White and non-white respondents to the GEM survey narrowed very sharply between 2017 and 2018. Even if the non-white TEA rate remained just above that for the White respondents, the very sharp fall is still a cause for concern. 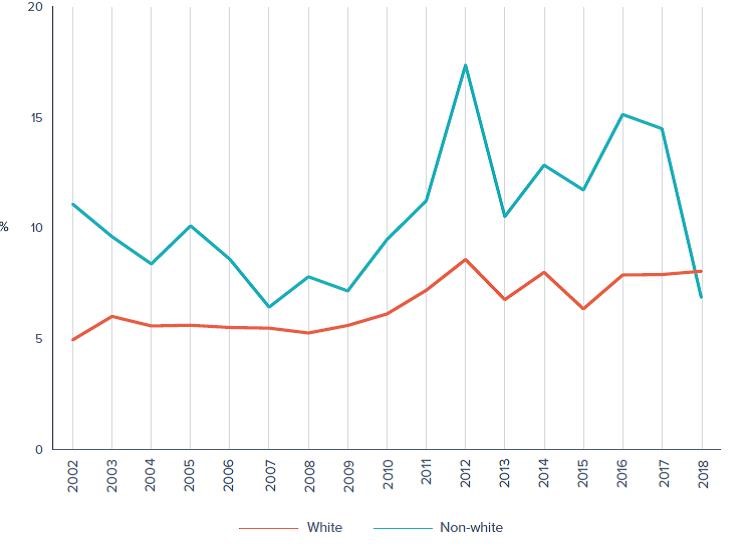 Initial analysis by the GEM UK team points to a decline in the TEA rate amongst some recent ethnic minority immigrant communities during the period of economic uncertainty after the EU referendum as one likely cause, but this still remains to be investigated in detail as new data emerges, hopefully in the next wave of GEM results due in coming months.  CREME and the ERC are also working on a new survey linked to GEM in the West Midlands which will hopefully examine this issue in more detail.  This work is becoming even more pressing with the finalisation of post Brexit trading and immigration arrangements due in coming months.  These could have very significant implications for ethnic minority start-up activity in years ahead.

END_OF_DOCUMENT_TOKEN_TO_BE_REPLACED

Ground-breaking research collaboration to shine a light on social enterpris...
Scroll to top