Lack of preparedness and an inability to spot their biggest threats are leaving small firms across Europe at risk of crisis and collapse, a major new study has found.

The survey of 2,975 firms across five of the continent’s most dynamic cities – London, Paris, Frankfurt, Milan and Madrid – found that as many as a third of firms had experienced an “existential crisis” in the previous five years. In some cities, notably London, this rose to almost half of firms led by people from an ethnic minority.

Despite this, fewer than half of firms sought external advice or business support in the past year to help them plan to cope with a crisis.

Academics from the Enterprise Research Centre, which carried out the research in partnership with European researchers and with support from J.P. Morgan, said the vulnerability of small- to medium-sized enterprises (SMEs) to shocks was “deeply concerning” ahead of the UK’s departure from the European Union.

In particular, they warned that a lack of tailored support for ethnic minority entrepreneurs posed a threat to the future dynamism of European economies.

The study focused on the experiences of around 600 firms in each city, with approximately half led by women and a third by someone from an ethnic minority. All of the business leaders surveyed scored relatively highly on a personal resilience scale, with almost no differences based on gender, ethnicity or location in a low- or middle-income area.

Overall, nearly one-third (31%) of the firms across the five cities reported having experienced a major crisis in the preceding five years, with the highest proportion in London (38%). The experience of ethnic minority entrepreneurs varied by city, but in London almost half (48%) had been through a crisis, compared to 37% of non-minority-led businesses.

However, firms often overestimated the impact of perceived threats to their business – and downplayed factors that actually led to their crisis. Business leaders in most of the cities regarded ‘internal’ factors such as a key staff member leaving or being struck down by illness as their biggest threats. But in fact, the true cause of their crisis often came from the external environment – principally changes in customer behaviour or costs, as well as regulation, strikes and crime. Minority business leaders in general were more likely to see risks as potentially catastrophic to their firm than their non-minority counterparts.

Between a third and half of the businesses across the five cities admitted to carrying out no risk or crisis planning at all. This was highest in Milan (51%) and lowest in London (35%).

And less than half of firms (44%) took advice from someone outside their firm in the previous 12 months, falling to a third (33%) of ethnic minority-led businesses. This included accountants, lawyers, private networks and government or local authority advice or support. Minority leaders were more likely to consult informal sources such
as family members.

When it came to rating the types of help that made the biggest difference in overcoming their crisis, respondents gave very different responses across the five cities. London firms saw having access to others leaders’ experience as most useful, while in Paris extra financial support was seen as most important. Overall, ethnic minority business leaders were keener to access various sources of support than non-ethnic business leaders. One potential explanation might be that ethnic minority entrepreneurs face more challenges due to lack of personal networks, access to finance and language or cultural barriers.

Ethnic minority businesses are estimated to contribute £25-£32 billion to the UK economy alone each year, while women-led enterprises contribute around £70 billion (Source: ESRC).

London-based entrepreneur Simeon Quarrie, 38, has had his resilience tested while ‘pivoting’ his business, Vivida, from wedding photography to virtual reality (VR) in the past four years. But the father-of-two said that getting there was tough, admitting that his Caribbean heritage may have meant his inclination was to “bunker down” and pursue his new path independently, rather than asking for help. “I think sometimes phrases you may have grown up with like ‘don’t take money from anyone’ don’t necessarily marry up
with the entrepreneurial mindset,” he said.

After weathering the loss of major clients which forced him to dramatically slim down his team, Simeon’s business is now taking off again in his new field. Recently, Vivida was accepted onto the government-backed London Office for Rapid Cyber Advancement (LORCA) innovation incubator.

Simeon added: “As I’ve gone through my business life, the signposts pointing in the direction of help and advice have probably always been there but my eyes weren’t  open to it. It needs to be articulated in a way that isn’t seen as a handout, which puts off a lot of entrepreneurs.
“If we can find a way of engaging entrepreneurs when things are going well and openly talk about the difficulties business owners face, that for me will create a marked change. We need to see resilience as part of the journey and celebrate it.”

The Enterprise Research Centre said the findings should lead to changes in business support structures, including:
• Better links into under-served businesses by government-backed business support and private sector bodies, to provide appropriate and accessible support in the event of a crisis.
• With Brexit approaching, enhancing government-backed support to focus on tools to boost firms’ resilience, with a focus on helping small businesses identify and plan for risk.
• Boosting the power and resources of local area support organisations to understand vulnerabilities in small businesses and consider how to bolster provision, especially for female and ethnic minority entrepreneurs.

Professor Stephen Roper, Director of the Enterprise Research Centre, said:
“On the eve of the UK’s departure from the European Union and with the long-term relationship still to be worked out, it’s deeply concerning that so many smaller firms across Europe appear to be both experiencing crises and unprepared for future shocks.
“This appears to be particularly true for ethnic minority entrepreneurs in London and some other places. With members of minority communities forming a growing proportion of entrepreneurs across Europe – generating billions in revenue and creating thousands of jobs – the ‘bumpier ride’ that many experience should jolt policymakers into making sure support is targeted and tailored.
“Our findings suggest that minority entrepreneurs may not see the current support on offer as directly relevant to their specific circumstances. And if their businesses struggle or fail as a consequence when crisis inevitably hits, that’s bad news as we enter a period of more sluggish growth in the world economy.
“This is not just a London or a UK issue; we are seeing it across Europe. If the global economy suffers a downturn, we need to ensure small businesses have the tools to prepare for it.”

Hang Ho, Head of EMEA and LATAM Philanthropy, J.P. Morgan, said:
“Successful and diverse small businesses are key for our communities and local economies to thrive – creating jobs, spurring important innovation and providing valuable services.
“Small businesses run by women and ethnic minorities face unique challenges. We believe that these findings at a city-wide level across Europe can help policy makers and funders better understand particular challenges faced by entrepreneurs from underrepresented groups and provide insights on what can be done to help them face adversity.” 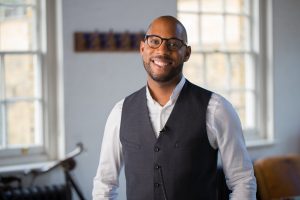 A longer version of Simeon Quarrie’s case study is available on request from James Tout (contact details below). Simeon is also available for media interviews. 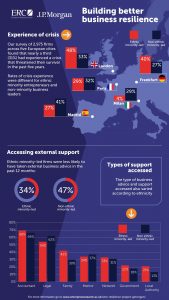 4. About the Enterprise Research Centre
The ERC is the UK’s leading independent research institute on growth, productivity and innovation in small and medium-sized enterprises (SMEs). It is funded by the Economic and Social Research Council (ESRC), Department for Business, Energy and Industrial Strategy (BEIS), Innovate UK, The Intellectual Property Office (IPO) and the British Business Bank (BBB). The ERC is producing the new knowledge around SMEs that will allow us to create a business-friendly environment nationwide, grounded in hard evidence. We want to understand what makes entrepreneurs and firms thrive so we can spread the lessons from best practice and make the UK a more successful economy.
The Centre is led by Professors Stephen Roper of Warwick Business School and Mark Hart of Aston University, Birmingham. Our senior researchers are world-class academics from both Aston and Warwick Universities as well as from our partner institutions which include Queens University Belfast and the University of Strathclyde.
http://www.enterpriseresearch.ac.uk

5. About J.P. Morgan
J.P. Morgan is committed to supporting small businesses to start-up, grow, create jobs and opportunities and revitalize their local communities. The firm has committed $150 million since 2017 to support small businesses globally over five years – particularly those owned by women, veterans and those from black, minority ethnic and migrant backgrounds. This support seeks to improve the resilience of entrepreneurs, building entrepreneurial pathways for underrepresented populations in local communities and supporting diverse entrepreneurs in high-growth sectors to thrive.