News
You are here: Home1 / News2 / Blog3 / Is Declining Dynamism to blame for our Productivity woes?

Over the past decade, we have seen a historic slowdown in productivity growth. While there is some cause for optimism based on the rapid adoption of tech during the pandemic, boosting productivity should still be the top priority for any government. After all, more than anything else, it is what determines wages and living standards.

Over the past five years, policymakers have tended to focus on the UK’s long tail of underperforming SMEs as the main route to improving productivity. It’s not a bad idea per se, if we could close the productivity gap between our top performing firms and the rest then it’d boost UK GDP by £270bn and bring us closer to German and American levels of productivity. This is why a range of policies, including the recently announced Help to Grow scheme for SMEs, are focused on supporting more SMEs to adopt best practices in digital adoption and management.

Yet, while our long tail may help to explain why we are less productive than Germany or the US, it doesn’t explain why productivity growth has slowed down across the West or why the slowdown has been sharpest in the UK.

At a recent meeting of the APPG for Entrepreneurship, Prof Mark Hart from the Enterprise Research Centre challenged the long tail narrative. He pointed out that since the financial crisis it’s been the long tail that’s added the most productivity growth, while the most successful have seen labour productivity fall or stagnate. Part of the explanation is that the top 25% of the productivity distribution were more resilient and as a result were able to retain staff even when turnover was falling. The result was a fall in real wages and productivity. He made the provocative point that an exit of some of the UK’s most productive businesses might actually create the space for worse performers to improve their productivity.

There’s precedent for this. Creative destruction is a key driver of productivity. As economist Magnus Henrekson writes:
“Economic growth is not primarily about firms growing by a similar percentage or productivity rising in existing jobs because of technological change and more capital per worker. Rather, it comes mainly from churning (firm and job turnover) and restructuring— mostly shifts in production from less to more successful firms within narrowly defined industries, rather than from declining to growing sectors.”

Higher rates of job reallocation – that is the sum of employment changes from businesses starting up, closing down, expanding or contracting – are associated with higher rates of economic growth. The same is true for rates of worker reallocation, people moving from job to job. In other words, business dynamism is what drives growth. 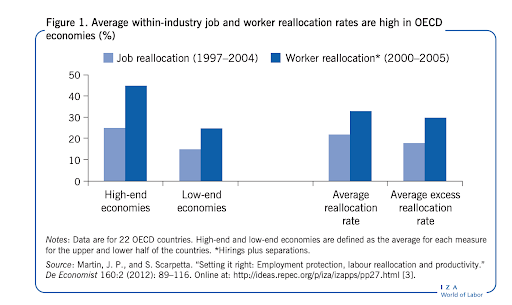 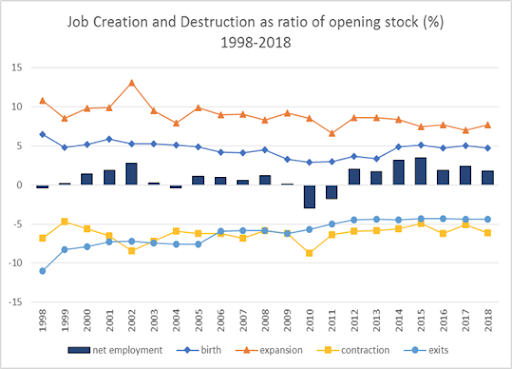 It may be difficult then to blame job reallocation rates for the UK’s decline. However, there is still some evidence that business dynamism has got worse in the UK. Research from Nesta found that the allocative efficiency of the UK economy fell significantly between 1998 and 2007. In other words, we became worse at allocating resources i.e. workers and capital to our best businesses. The Nesta paper concluded: “If Britain’s productive resources were as efficiently allocated at the end of the period as they had been at the beginning, productivity would have been 7.6 percentage points higher among firms of this size. This is equivalent to around £79 billion of lost GDP.”

It is possible that job reallocation might have concealed the decline in dynamism. There might be a case for focusing on worker reallocation, people moving from job-to-job instead. A recent paper from Census Bureau economist Henry Hyatt highlights a worrying trend. Job-to-job flows in the US have fallen dramatically since 2000. This is interesting because while job reallocation fell consistently between 1980 and present, the decline only became linked to a fall in productivity post-2000. 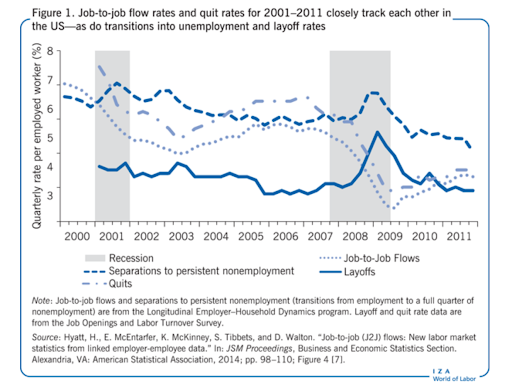 There are a few reasons to look at job-to-job moves specifically. Workers typically move to jobs that pay better and last longer. It is typically part of an efficiency-enhancing process where productive employers expand and unproductive employers cut jobs. However, while the job reallocation rate has remained roughly stable in the UK, job-to-job flows do appear to have fallen.

Data from the Labour Force Survey shows that seasonally-adjusted job-to-job flows have not reached their pre-Financial Crisis level. 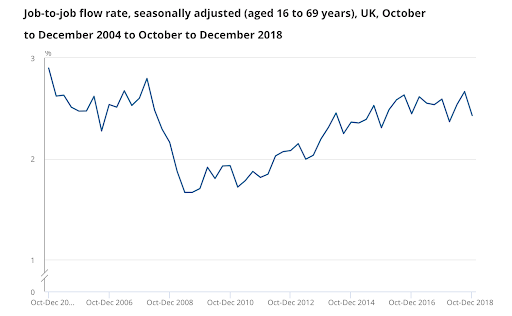 The above data only goes back to 2004. Earlier, slightly different data, cited by the Bank of England shows the decline began in 2001. Interestingly, This data seems to mirror the decline in allocative efficiency that the Nesta paper points to. 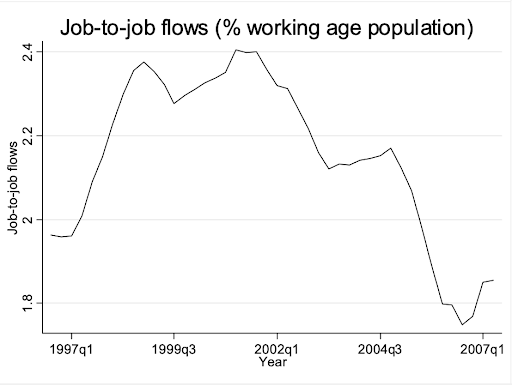 In Hyatt’s paper, he points to a range of explanations for the US decline, including:

His data suggest the first two factors are the most significant (explaining 9-21% and 8% of the decline respectively). But it’s clearly not the full story.

One factor he doesn’t mention is the high cost of housing in our most productive places. Could a decline in geographic mobility, documented in the UK by the Resolution Foundation and in the US by the Mercatus Center, be to blame?

The Resolution Foundation notes that although the population has grown by 11% since the millennium, the number of workers moving to new jobs has stayed the same. This is a 25% drop (0.8% to 0.6%) in the share of the population moving. Their data also reveals that the decline has been starkest among young graduates:

“whereas graduates under the age of 35 were almost 5.7 times more likely to move region and employer than non-graduates in the 1990s they are now just 3 times as likely.”

This decline in geographic labour mobility may have an outsized effect on productivity compared to other job to job flows.

“People who change job consistently benefit from pay rises 5.5 times as large as people who remain in the same job, and those that move region and employer see typical pay rises 6 times as large.”

The issue could be that moving to a high productivity region such as London may improve your pay, but in real terms you could be worse off. This point is starkly made in a recent Economist article on what the author describes as Barratt Britain.

“In Cramlington, Richard, who works in sales, earns around £28,000 a year and his partner, a part-time administrative assistant, earns £12,000. That is enough for a four-bed house and two cars. “If I’d moved to London and got a graduate job, I’d probably be renting a shitty flat and I doubt I’d have two kids,” he says.

Is small lending too big to fail? Covid-19 and P2P lending to SMEs