The impact of migration on the UK jobs market was a major theme of the Brexit debate. The effects of migration, despite their oversimplification in that debate, are, complex. Migrants may have taken jobs that would otherwise have gone to long-term UK residents and as a consequence helped create a climate of distrust in many local economies. Or, have migrants filled vital skills gaps in key sectors of the economy and for small businesses who find it difficult to compete against large employers for skilled workers?  Migrants also do (seasonal) work that long-term residents are reluctant to undertake.

Migrants are also significantly more likely to start new companies with the potential to create new jobs, something which received little attention during the Brexit debate.

What is the evidence here? Well, every year a survey is conducted in the UK of the percentage of the adult population engaged in starting a business. Called the Global Entrepreneurship Monitor (or GEM) survey (www.gemconsortium.org), the same survey is undertaken in around 60 countries worldwide and has been going now for just under 20 years. As the Figure below shows, the 2015 GEM UK survey shows that immigrants are more likely to start their own business than people born and brought up in the UK[1].  The percentage of immigrants involved in starting a business – 15 per cent – is around three times as high as that among life-long UK residents (5%) and this includes both EU and non-EU immigrants. Living abroad also increases the probability that an individual will start a new business with UK-born returning migrants also have a significantly higher rate of new business start-up than the life-long resident population (10.5%).  These gaps were wider in 2015 than in previous years. 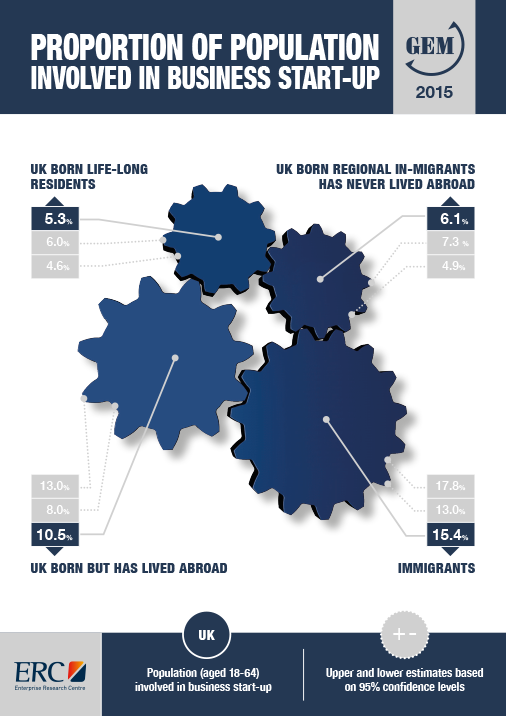 Why are levels of business start-up higher among migrants? The wider experience and skills of many immigrants and returnee migrants may enable them to spot and exploit opportunities more readily. On the other hand, life-long residents of the UK may find it easier to obtain employment than immigrants.  Another view  is that the differences are due to ‘necessity’ with migrants facing few other choices. As the figure below suggests this is not the case, however, with migrant entrepreneurs instead driven by ‘opportunity’ rather than ‘necessity’. 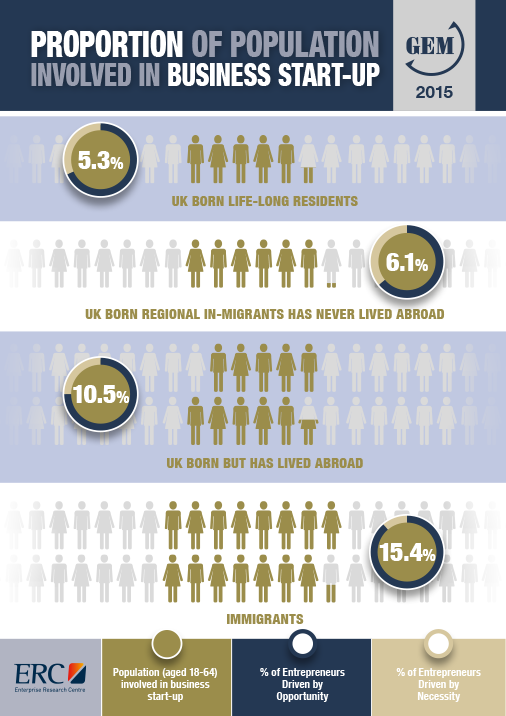 Other recent research by Mark Hart and Tomasz Mickiewicz confirms the picture of high levels of business start-up among migrants. There is a little more to this story, however. Migrants are also more ambitious to grow the businesses that they start with the potential to create lots of new jobs. So this is a positive double effect: migrants are more likely to start and grow new businesses in the future.

Limiting migration to the UK for those without a job offer may be a tempting policy option in the future as the UK Government seeks to apply the brakes to the flow of people into the UK. However, this may exclude some potential migrant entrepreneurs seeking new opportunities in the post-Brexit environment, an impact we need to be careful to avoid.  As ever the immigration debate is complex and simple targets to reduce the overall level of net in-migration may not serve the best interests of future economic growth.

We acknowledge the assistance of the GEM UK team: Jonathan Levie, Karen Bonner and Tomek Mickiewicz

Please note that the  views expressed in this blog belong to the individual blogger and do not represent the official view of the Enterprise Research Centre, its Funders or Advisory Group.

Opportunities at the ERC

END_OF_DOCUMENT_TOKEN_TO_BE_REPLACED

How can we fill the post-Brexit information gap for SMEs?

An Entrepreneurial Perspective: What will be the effect of Brexit on small-to-medium...
Scroll to top