Brexit’s risk to recent positive trends among Northern Ireland’s entrepreneurs and micro-firms has been spelt out in new research.

The two studies by the Enterprise Research Centre (ERC) and Queen’s Management School show that the number of people in Northern Ireland becoming entrepreneurs has risen significantly in recent years, while its micro-firms (those employing 1-9 people) are the most profitable in the UK and more likely to export than most other regions.

The ERC said the findings underlined the need for a practical solution to be found to the border issue in the government’s Brexit negotiations with the EU, to avoid “turning back the clock on enterprise”.

The data from the latest Global Entrepreneurship Monitor (GEM) report for Northern Ireland show that over the past 15 years, the proportion of Northern Ireland’s population describing themselves as “early stage entrepreneurs” (those in the process of starting a business or running one for less than 3.5 years) has grown by 75%, to 6.5% of the working-age population – although this still lags the UK rate as a whole (8.7%).

Women are around half as likely as men to become entrepreneurs, with the only exception to this being Ards and North Down, where women are 60% more likely than men to be in the early stages of running a business.

According to the research, business owners in Northern Ireland have been more optimistic in recent years when it comes to expectations around the number of jobs they intend to create. In the most recent period (2015-17), both early-stage entrepreneurs and established firms in Northern Ireland expected their companies to create more than 10 jobs over the next five years, both of which were higher than the UK average.

In a separate report published today, ERC and Queen’s Management School academics have looked at the contribution so-called ‘micro-businesses’ (those with 1-9 employees) make to Northern Ireland’s economy and compared this with the rest of the UK, the Republic of Ireland and the USA.

But it appears only a minority of NI micro-firms have ambitions to scale: nearly 8 in 10 wish to keep their business at the same size, with only 18% reporting an ambition to scale to ‘national or international’ size.

The new reports follow findings from the ERC’s Local Growth Dashboard 2018, published earlier this year, which showed that Northern Ireland had the highest rate of firms reaching their first £1m turnover within three years of any UK region, as well as recording some of the biggest increases in productivity in recent years.

Nola Hewitt-Dundas, Professor of Innovation Management and Policy at Queen’s University Belfast and a senior research associate at the Enterprise Research Centre, said: “While Northern Ireland has always been somewhat behind the rest of the UK for start-up activity, it’s clear from our research that entrepreneurs who do take the plunge here often succeed in growing their businesses quickly and profitably. “It’s also notable that among our smallest companies – who employ nearly 20% of people in Northern Ireland – we see relatively high rates of exporting, which isn’t that surprising given our proximity to the UK’s only land border with the EU.”

Mark Hart, Professor of Small Business and Entrepreneurship at Aston Business School and Deputy Director of the Enterprise Research Centre, said: “The danger is that unless we see a Brexit deal that enables the free flow of trade across an open border, we could turn the clock back on some of the enterprise progress we’ve seen of late. “That would be bad news not just for the entrepreneurs and small firms who make such a big contribution to our economic vibrancy, but also to the larger companies and public sector bodies higher up supply chains that rely on their goods and services.” 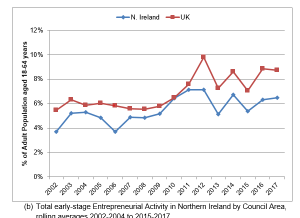 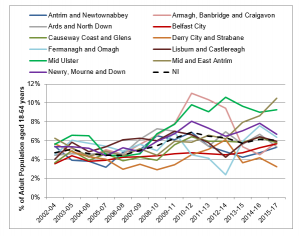 The GEM Northern Ireland 2017 report was co-authored by Professor Mark Hart of Aston University in Birmingham, Dr Karen Bonner of Queens University Belfast, Professor Jonathan Levie of the University of Strathclyde and Laura Heery of Ulster University. The sample size in Northern Ireland in 2017 was 1,012 adults over 18 years of age. Of the 326,000 respondents to GEM UK surveys for the period 2002-2017, almost 40,000 respondents were from Northern Ireland. The Global Entrepreneurship Monitor (GEM) is an international project, involving 54 economies covering 68% of the world’s population in 2017, which seeks to provide information on the entrepreneurial landscape of countries.  Many studies have shown that entrepreneurship is an important driver for economic growth, competitiveness and job creation. The results of the GEM data analysis are used as key benchmarking indicators by regional and national authorities around the world.

END_OF_DOCUMENT_TOKEN_TO_BE_REPLACED

New data on SMEs in Northern Ireland
Scroll to top