Earlier this week a report from the Institute for Fiscal Studies highlighted the vulnerability of different groups of the population to unemployment following the current crisis. Businesses also vary in terms of their crisis planning and resilience, and research has shown that SMEs are less likely to connect risk identification and business planning activities, which means that they tend to be largely unaware of the potential impact of future shocks to their businesses.  [i]

Of course, the rapidity and impact of the Corona Virus crisis has taken even the best prepared businesses by surprise. But firms which undertook crisis planning, particularly those with tested recovery plans in place before the Corona Virus struck, are likely to be coping better with the crisis and also more likely to bounce back quickly when the current restrictions are lifted [ii].

Last year we asked small companies across five European cities whether they had plans in place for periods of adversity such as the Corona Virus crisis. (see our Building Better Business resilience report ). In London around two thirds of small firms told us that they regularly thought about the risks to their business. This was a higher proportion than in any of the other cities we considered which included Frankfurt, Paris, Madrid and Milan.

Male-led small firms in London were more likely to be planning for future risks than female-led firms (see Figure 1). Ethnic minority led firms were also more likely to have engaged in planning future risks. There was also a slightly lower level of planning for future crisis among firms in poorer parts of London. Female-led firms, particularly in low income areas, may therefore be hit harder by the Corona Virus crisis than other small businesses. 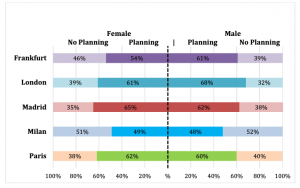 The high-level of planning for future adversity among businesses in London however should mean that firms in London are better able to respond to the post crisis upturn than those in other European cities. As Figure 1 suggests, we found particularly low levels of crisis planning among firms in Milan, an area which has also been particularly hard hit by the Corona Virus crisis.

Along with their stronger emphasis on crisis planning, firms in London are also more willing to seek external advice and support than those other cities. This external support will be particularly important during the crisis and also the recovery phase [iii]. 52 per cent of firms in London had sought external advice in the past year compared to only 36 per cent in Paris.

The two most common sources of external advice for London based firms were lawyers and accountant (see Figure 2). However, we found that female and ethnic leaders were less likely to seek any external advice than their male and non-ethnic counterparts. When they did take advice, they were more likely to consult informal sources such as family members, friends and mentors. Input from other business leaders with similar backgrounds and experience was also often identified as a potentially valued source of advice by female and ethnic entrepreneurs

What does this mean for business support initiatives during and after the Covid crisis? The variation we observe across the five cities in which we researched indicates that tailored solutions which acknowledge local variation and entrepreneur differences are key. Cities which can convene sources of expert advice could increase the accessibility of important external advice for those firms with less experience of engaging with finance providers, legal services or accountants, for example. Policy and representative groups also have an important role to play in connecting local business leaders to enable and encourage peer support and networking.

Disaster doesn’t have to mean the end of the road

The business effects of pandemics