Taxpayer support for high-tech innovation benefits the economy by significantly boosting jobs, turnover and productivity among the companies backed, new research has found.
Over a 13-year period, R&D grants spurred growth worth £43bn to the British economy – more than five times the £8bn invested – and created around 150,000
jobs. But the study – the largest and most comprehensive of its kind, carried out by the Enterprise Research Centre – also found big variations in the types of firms most likely to benefit from grants, as well as regional differences in the strength of the effects.

Scientific and technological innovation is seen by the Government as a key plank of its new industrial strategy. But until now, our understanding of the effects of grants – largely distributed by
research councils such as Innovate UK and the Engineering and Physical Sciences Research Council (EPSRC) and totalling some £1.7bn per year – has been patchy.
The new research, which studied £8bn worth of grants to nearly 15,000 firms over a 13-year period (2004-2016), shows the effects can be transformative for recipients.
The main findings show:

Within that overall picture, other trends were observed. The biggest growth in both employment and turnover occurred among manufacturing firms (which grew 24% and 33% respectively). And on even closer inspection, the impact seems to be particularly large for the least productive companies. Six years after the award of the research grant, these firms chalked up employment growth 23% higher than their peers, with turnover growing by more than 50% and productivity jumping 22% on average.

There were also geographic variations in the impact on growth. While firms across all parts of the UK have received significant sums, the biggest investments occurred in the ‘Golden Triangle’ (London-Cambridge-Oxford), as well as knowledge industry clusters across the wider South East, West Midlands and Eastern Scotland. Job creation was strongest in London (+31%), the South East (+25%) and the North West (+25%), while the turnover of grant-receiving firms was boosted most in Scotland (+29%), Yorkshire (+31%) and London (+35%).
In stark contrast, some regions saw no statistically significant improvement in the economic performance of recipients: In the South-West, Wales and Northern-Ireland, neither employment nor turnover growth was significantly different to non-recipient firms.

Prime Minister Theresa May has stated her ambition to transform Britain into the “global go-to place for scientists, innovators and tech investors”, backed by an extra £2bn a year for research and development (R&D) by the end of the current parliament, taking total spend to £4.7bn. This will be partly funnelled through the new Industrial Strategy Challenge Fund, which aims to support key growth sectors including medicines, robotics and artificial intelligence (AI), clean energy and driverless vehicles. The researchers said their findings could help to inform how R&D funding is targeted, to generate the best return on investment for ‘UK plc’.

The ERC is a network of university researchers with a core team based at Warwick Business School and Aston Business School in Birmingham. It is the top UK research institute on the drivers behind private sector firm growth and is holding its annual conference at London’s Shard today [Thursday, September 7th].

Professor Stephen Roper, Director of the Enterprise Research Centre, said: “This is the largest and most detailed study yet of the impact public funding for science and innovation has on growth at the firm level. It shows very clearly that grants to support R&D have a positive impact, creating jobs and fueling growth in the high-tech, high value-added sectors that the UK must encourage to remain competitive on the world stage. “It’s well established that innovation grants can help with commercialising new technology by providing firms with additional financial slack to undertake riskier research activity which might take time to deliver products or services that are market-ready.
“The greatest impact seems to be on smaller manufacturing businesses, which see the biggest boost to growth and productivity, helping them to catch up with more established firms.
“There’s also an uneven distribution of impact across the UK which we need to understand to ensure all regions can participate in a broad-based industrial strategy that harnesses regional strengths effectively.”

Case study 1 – From science fiction to international sales
One company to benefit from innovation grant funding is CN Bio Innovations, a university spin-out at the forefront of ‘organs-on-a-chip’ technology. Counting major pharmaceuticals and consumer goods firms among its customers, CN Bio has licensed cutting-edge intellectual property from UK and US universities to develop chips that enable human cells cultured in the lab to mimic the function of major organs. The chips allow scientists to accurately test how medicines and cosmetics will affect humans, avoiding the need for animal testing. The science fiction-style technology has seen the company secure a $26m contract from the US federal government to develop a ‘human body on a chip’, linking 10 different organ-chips together to replicate the body’s response to drugs and diseases. CN Bio has used its LiverChip technology to study liver disease, in recognition that in the UK it is the only major killer that has been increasing in recent
years.

The firm has grown rapidly since its foundation in 2009, aided by grants from Innovate UK and the European Union. It has just been awarded a £688,000 grant from the new Industrial Strategy Challenge Fund to work with a major pharmaceutical firm using organs-on-chips to find new uses for existing drugs. Chief Executive Dr Emma Sceats, who studied chemistry at the Universities of Bristol and Oxford, as well as the Massachusetts Institute of Technology (MIT) in the US, came to the company via Oxford University’s technology licensing office, where she gained close familiarity with the spin-out process. She sees grant funding as critical for ‘de-risking’ scientific innovation.

“We’re more likely to be successful in developing a great product if we work closely with the end user – often a pharmaceutical firm and, ultimately, patients,” Dr Sceats explains.
“Grants help to foster these collaborations and improve the likelihood of a successful outcome by contributing funds and resources, or access to knowledge and other capabilities.”
Grants have also enabled CN Bio to grow its headcount to 16, deepening its skills base in the process. “We are a multidisciplinary company but it’s unusual to find people who can cover so much ground both technically and commercially. Growth has enabled us to hire specialists who have brought new skills into our company.” Innovation funding has allowed CN Bio to think big. “In terms of future growth, we have aspirations to be a £20-£30m revenue company within the next five years,” added Dr Sceats.
Recently, the company relocated from Oxford to the Biopark in Welwyn Garden City, a specialist tech incubator centre owned and run by the University of Hertfordshire. Life sciences represents a huge area of opportunity for the UK as part of a wider industrial strategy, said Dr Sceats.
“The biotech, life sciences and pharma sectors are a major employer in the UK and create lots of highly skilled, high-paying jobs,” she said. “We would be fools to ignore that, because we’ve got the foundations for a highly successful industry in the UK courtesy of our world leading research base at universities. “We always lament that some key technologies were developed here, but the commercial success was achieved in the US. We’ve got to work really hard and invest wisely to make sure the next extraordinary inventions see the light of day in the UK and that we get the upside by nurturing these home-grown technologies all the way through to a conclusion.”

Case study 2 – Spaceship building on the Clyde
Craig Clark will go down in the history books as the man who launched Scotland’s first satellite. Aided by innovation grant funding, his firm, Clyde Space, has grown rapidly since
starting up in 2005, in the process turning Glasgow into the ‘satellite capital of Europe’. The firm, which employs 80 staff at its high-tech production facility, specialises in the design, manufacture and operations of ‘nanosatellites’ – the latest generation of small spacecraft the size of a whisky box, which have a huge range of data collection applications, from telecommunications to shipping tracking and infrared imaging of the world’s oceans. Customers include NASA and the European Space Agency, as well as an increasing number of commercial enterprises.
Since designing and manufacturing the first Scottish-built satellite, which was commissioned by the UK Space Agency and launched in 2014, the firm has seen its order book swell. The company is on track to hit turnover of £10m by next year and 80% of its products are exported – the majority to North America.
Ten of its satellites are due to launch into space in the next 12 months, with 15 more in production right now. According to Mr Clark, an MBE holder who earlier this year won a Queen’s Award for Enterprise, more spacecraft were built in Glasgow in 2016 than any other European city.

Mr Clark has received different forms of support for his business, including an industrial fellowship that paid his first year’s salary, as well as a number of grants for product feasibility and development from Scottish Enterprise totalling £75,000 each.

He said public support for innovation was especially vital in the UK, given the relatively underdeveloped venture capital (VC) environment. “If you’re out in Silicon
Valley, VC firms will say it’s easy to get $5m. That would be a huge amount of money in the UK for your crazy idea, but we don’t have that luxury. Without grants to support the development of products for our market there’s no way we would have got where we are. So the support structure we have is absolutely required to get more start-ups growing into successful small, and then large, businesses”. Collaboration with universities has been central to Clyde Space’s growth strategy. Currently, the firm is working with academics at Glasgow University to develop new
gravity gradient sensors using cutting edge quantum science. Mr Clark describes these sensors – which have the promise of replacing existing hardware at much lower cost – as having the potential to “upset the market”.
“The space industry has been growing rapidly because it’s becoming such an essential part of our lives as a way to capture and transfer data,” said Mr Clark. “Our market is growing at about 25% per year for small satellites and it’s estimated there will be over 3,000 new satellites that weigh less than 50kg each – so basically what we make at Clyde Space – in orbit in the next five years.
“There’s a lot of opportunity for the UK to dominate across the value chain from launch services, to data services, making spacecraft, ground stations; all of the satellite sector value chain. We need to be supporting the space industry because it’s one of those sectors that’s just going to grow and grow.”

2. Differences in effects by region
The following chart shows the impact of R&D grants on turnover, productivity and employment across the nations and regions of the UK: 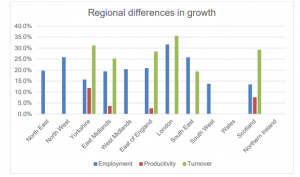 Small business past, present and future