The UK’s manufacturing sector is in a “fragile” state, with slower growth and a drop in start-ups revealing a wider malaise beyond the troubles of the car and steelmaking industries, new research shows.  The Enterprise Research Centre’s State of Small Business Britain report presents a new analysis of the fortunes of the manufacturing and services sectors since the Great Recession of a decade ago.

Despite the UK’s 150,000 manufacturing firms continuing to employ around 2.5m people, both of these figures remain well below their pre-Recession peak – with recent high-profile announcements in the automotive and steel sectors adding to a growing sense of despondency.
The ERC’s new study shows that the number of existing manufacturing firms achieving strong growth has dropped in recent years, with new manufacturing startups falling by 10%. Furthermore, only around one in ten manufacturing firms are managing to grow their productivity by boosting turnover faster than staff numbers. The slump is particularly notable in the automotive sector, which saw the number of new entrants fall by 27% to 392 in 2018 compared to the previous year, while measures of fast growth and productivity rises were all down on previous periods.
Mark Hart, the ERC’s Deputy Director and Professor of Small Business and Entrepreneurship at Aston Business School, said the slowdown in Britain’s industrial heartlands was especially worrying and suggested a “breakdown in business dynamism” which would have far-reaching consequences for the UK’s economic wellbeing.
The ERC will launch the findings at its upcoming State of Small Business Britain conference on June 27th, where it will debate how to strengthen key sectors of the economy alongside automotive expert Professor David Bailey of Birmingham Business School and Archie MacPherson of Warwick Manufacturing Group, as well as representatives of the FSB and officials from the Department of Business, Innovation and Industrial Strategy.
In its analysis of new data from the ONS Business Structure Database, the ERC looked at a range of metrics associated with SME growth. It found that 1,357 fewer manufacturing start-ups were launched in 2018 compared to the year before – a drop of 10.2%.
Among scaling firms, just 5.4% of manufacturers with a turnover of £1-2m in 2015 grew to at least £3m turnover in 2018 – little more than half the proportion of service businesses that hit this milestone (9.1%).
And manufacturing companies were also significantly less likely to be considered ‘high growth firms’ than their services counterparts. High growth status can be measured in different ways, but the OECD counts firms with 10 or more employees that average 20% headcount growth over three years. Newer definitions include firms with fewer employees, or which achieve 10% average employment growth. These firms are considered important because despite being few in number, they create disproportionately high numbers of jobs.
Looking across firms of all sizes, manufacturing firms in Northern Ireland, Yorkshire & Humber, London and the East of England were most likely to achieve this over the 2015-2018 period, with much lower proportions in the West Midlands, Scotland and the South West. When only larger firms were considered, the Midlands performed more strongly.  The dampened growth rates among manufacturing firms come despite the sector showing generally higher productivity growth than service firms. Some 10.6% of manufacturing companies saw turnover rise faster than headcount in 2015-18, compared to just 7.5% in the services sector.
The State of Small Business Britain report provides a broader snapshot of the health of UK manufacturers in light of recent announcements about factory closures and job losses by the carmakers Ford at Bridgend and Honda at Swindon which the Society of Motor -Manufacturers and Traders (SMMT) has estimated could lead to the loss of 60,000 jobs directly and in supply chains. In May, British Steel collapsed into administration after a last-ditch appeal to the Government, putting a further 25,000 jobs at risk.
Professor Mark Hart, Deputy Director of the Enterprise Research Centre, said:
“The headlines we’ve been seeing in recent weeks, as major manufacturers have cut jobs and investment in the UK, only tells us part of the story.
“These announcements have to be seen in a wider context of slowing growth across the board which, combined with falling numbers of new firms starting up, is leading to a breakdown in business dynamism across our industrial base.
“While manufacturing may play a smaller role in our economy than in the past, it remains vital to the success of our economy and continues to make up over 40% of our exports by value.
“The ongoing uncertainty around Brexit will doubtless be contributing to the fragility we’re seeing in the growth of manufacturing firms. What those firms badly need is an indication of when some sort of stability is going to resume. It’s only then that this cloud of despondency hanging over the economy is going to clear.”

Case study: “Having all my eggs in Brexitland isn’t a long-term strategy anymore” 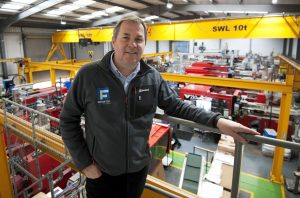 While many manufacturers are still seeing growth, Brexit uncertainty is influencing how they achieve it. This has been the experience for Greg McDonald, Chief Executive of injection-moulding firm Goodfish Group, headquartered in Cannock near Birmingham and with other sites in Worcester and Loughborough.
Since founding the company – which makes plastic components for a wide range of sectors including retail, automotive, aerospace and healthcare – in 2010, Mr McDonald has grown the firm’s headcount from around 30 to 125 through a string of acquisitions, with a turnover of £11.5m.

But the uncertain climate has forced Greg to explore new avenues for future expansion. Goodfish has established a subsidiary in Slovakia, an emerging centre of automotive production in continental Europe,  and is waiting on the outcome of the political deal around the UK’s departure from the EU before signing a lease on a new facility, which it hopes to be manufacturing from within six months.

“My mindset as a business-owner is that having all my eggs in Brexitland isn’t a longterm strategy anymore,” said Mr McDonald. “Whatever happens will, over the longer term, put a cap on job creation in the UK and some of that will be diverted to Central and Eastern Europe.” He has also seen a number of foreign-owned firms selling off their UK manufacturing facilities and believes this indicates the high-water mark of overseas investment in British factories may have passed. “You might see some onshoring or re-shoring, but actually the ownership of manufacturing in the UK has already been capped,” he said. “Business people don’t wait for politicians to make up their minds about how things are going to turn out.”
Policymakers could encourage smaller firms to grow staff numbers by reducing the burden of PAYE and national insurance contributions for younger companies, Mr McDonald said – as well as addressing the high up-front rental fees demanded by landlords on leased premises.“Basically to help an economy to grow, you want start-ups to be able to scale up,” he added. “Big companies tend to constantly reduce employees to increase productivity, whereas scale-ups are trying to build a business and whatever you can do to make that easier has got to help.” 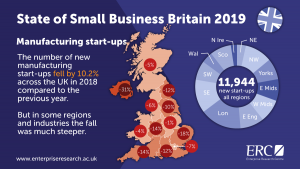 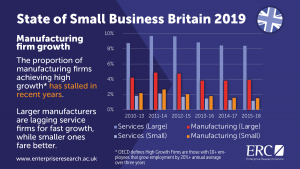 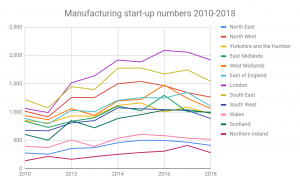 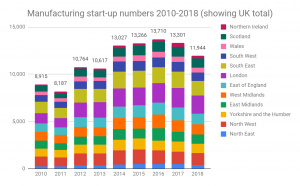 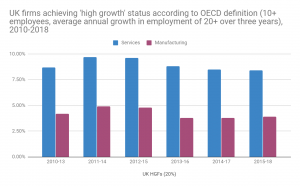 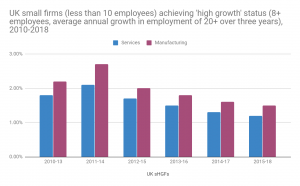 About the Enterprise Research Centre
ERC is the UK’s leading independent research institute on the drivers behind the growth and productivity of small and medium-sized enterprises (SMEs). It is funded by the Department for Business, Energy and Industrial Strategy (BEIS), the Economic and Social Research Council (ESRC), Innovate UK, The Intellectual Property Office (IPO) and the British Business Bank (BBB). ERC is producing the new knowledge around SMEs that will allow us to create a business-friendly environment nationwide, grounded in hard evidence. We want to understand what makes entrepreneurs and firms thrive so we can spread the lessons from best practice and make the UK a more successful economy. The Centre is led by Professors Stephen Roper of Warwick Business School and Mark Hart of Aston University, Birmingham. Our senior researchers are world-class
academics from both Aston and Warwick Universities as well as from our partner institutions which include Imperial College, Queens University Belfast and the University of Strathclyde.
Share this...

Is our obsession with fast growth and job creation stifling productivity?

SMES: HOW PROFESSIONAL MANAGEMENT SKILLS CAN GROW YOUR BUSINESS

What’s happening to finance in an uncertain world?