As the tortuously complex process of the UK’s departure from the EU takes another twist, Britain’s economy presents us with a deceptively simple conundrum.

Yes, we have had record headline jobs growth in recent years coupled with falling unemployment.  There are, however, widespread concerns about the quality of those jobs caused by the growing ‘gig economy’. And we now have the weekly round of headlines predicting – with varying degrees or indeed zero reliability – the thousands of job losses that will ensue due to whatever type of Brexit deal is finally negotiated.

Such headlines need to be understood in the context of the general pattern of job gains and losses in the economy.  The fact is, businesses are hiring and firing all the time. But it is the ‘normality’ of the scale of those actions which often goes unreported – in both good times and bad.

An examination of the UK business stock in the private sector between 1998 and 2017 reveals key trends in job creation and destruction. These data help us to understand the degree of ‘normality’ in the level of turbulence in jobs in the private sector. Using employee data for all employer businesses in the UK, the Enterprise Research Centre (ERC) has examined the average annual job creation and destruction rates between 1998 and 2017[1].

What do we observe in the UK?  Our analysis of the process of job creation and destruction shows that 4.5 million jobs in the UK were either created or destroyed in 2016-17.  That means that just over a fifth (22%) of all jobs in the private sector were either destroyed or created over the most recent 12 month period – a remarkable level of turbulence in the UK economy, or so it would appear. 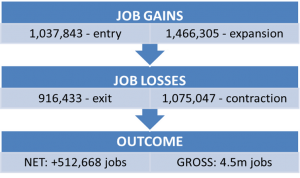 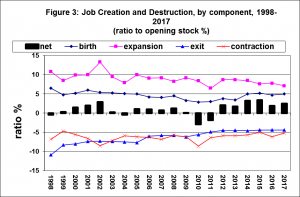 So, the point is, one needs to be very careful in disentangling any so-called ‘Brexit effects’ in the months and years ahead from such ‘normal’ large-scale turbulence in the hiring and firing practices of UK businesses.  How many of the economic forecasting models or the real or imagined sector impact studies of the effects of Brexit actually grasp this level of job churn in their underlying base assumptions on the future performance of the UK economy? A question to occupy our winter work programme and musings in the Enterprise Research Centre as we delve into the data and further examine how this varies by firm size, business age, sector and region – and, dare I say it, in this week of Brexit brinkmanship, which includes our future land border region with the EU27.

Please note that the views expressed in this blog belong to the individual blogger and do not represent the official view of the Enterprise Research Centre, its Funders or Advisory Group.

Why do some firms survive a crisis and others don’t?